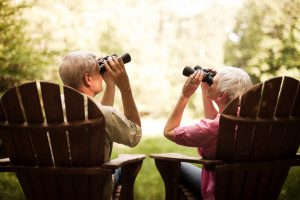 More than 100 species of bird, including boreal birds, birds of prey, perching birds and waterfowl call the Adirondacks home. Late spring/early summer is the best time for bird watching as when many species migrate back to the region at this time. Nesting season typically happens in June, and birds are known for quieting down as summer draws to a close.

Among the most prominent are Mourning Warblers, found in the area along the Wheeler Pond Loop Snowmobile Trail north of Old Forge. From Route 28 go north on North Street past the soccer fields on your left, which have also nesting Bluebirds, then go off the paved road at the airport.

Listen for Common Snipe winnowing — that’s the sound made by their tail feathers while in flight — in the air over the North Branch of the Moose River. Continue on crossing the river, and in that low area, you’ll find Yellow Warbler, Gray Catbird, American Bittern and Alder Flycatcher.

The nearby Wheeler Pond loop is a popular spot for the singing Mourning, Black-throated Green, Black-throated Blue, and Blackburnian warblers. The Mourning Warblers are often close by in the blackberry patches.

In the bog swamp along the Moose River reside Yellow-bellied and Olive-sided flycatchers Red-breasted Nuthatch, Gray Jay, and Black-backed Woodpecker.

Another good area for boreal birds is along the Stillwater Road, from Big Moose to Stillwater Reservoir. From the Big Moose Station follow a gravel road, to Stillwater. Most of this area is posted property, so make sure your binoculars are plenty strong.

Since there are more than 100 species it would be futile to try to list them all but here are some more that you can look for: The American Black Duck, The Bald Eagle, the Sharp-Shinned Hawk, The Broad-Winged Hawk, The Turkey Vulture, The Ruby Throated Hummingbird, The Kingfisher, The Osprey, and of course, the Common Loon.